I’d love to know what you thought when you read the title. There are some jokes I could make here, but I’ll only say that given how Les gives soundbites, I’d love to hear him explain the Second Law of Thermodynamics. I mean, who doesn’t think of Les Miles and mechanical engineers at the same time?

Les Miles has had quite an interesting time over the last few months. The poor guy goes from almost being fired to signing one of the best recruiting classes in the country. He’s one of the winningest coaches in LSU history. That’s as it should be considering what he’s paid. On the other hand, he also manages to drive a lot of people nuts by his “game management”. And by the way, there’s a certain SEC West team that’s had LSU’s number over the last several years. That doesn’t help. And you can bet that when LSU’s football season doesn’t meet expected goals, a lot of people will want to see Les Miles get fired. Just look at last season. Don’t get me wrong – I want LSU to win all the time, and by an overwhelming margin. But I hate to tell you this, that’s just not possible.

I have to say that I like Les Miles. I think he represents LSU well, and I also think he does a good job of managing the program. One time, he even said something nice to my son when we saw him out in public. He didn’t have to do that. You could say that he’s only paid to win football games. You could also say that in some respects several of the past football seasons have not met expectations. I can agree with that to a certain point. But I look at the fact that we’ve had a pretty good football team, and 90+% of the rest of the country would love to win as we have. To some people, winning all the time is everything. But I also think it’s important to have a coach that represents the University well. I think he does just that. So I wasn’t really happy with how he was treated at the end of last season. I think he handled the overall situation very well, and I think the university’s administration handled the situation as poorly as you could possibly imagine. While some of Les Miles problems are self inflicted, I think many fans place unfair expectations on him.

Mechanical engineers are also sometimes in the same boat as Les Miles. When the mechanical system is working as it should, we’re slow to give praise. After all, if the mechanical system works as designed, no “atta-boys” are necessary since the system met expectations. Les is paid to win. Engineers are paid to design stuff that works. Every time. Talk about pressure. And the engineering profession, as a whole, does a pretty good job of meeting the standard of care.

A really good example of this is when the space above a suspended ceiling is used as a return air plenum. This is very common in buildings all across the country. So what the design team is doing is using space above the ceiling to return air to the air handlers instead of hard ducting returns to the air handling machines. Much of the time, this system works well, and buildings don’t seem to have problems. Too often though, we see mold and moisture problems in buildings where this type of mechanical system is in use. Most of the time, these problems result because of induced negative air pressure at the building enclosure boundary. This results in unwanted moisture coming into the building that the building enclosure and mechanical system cannot handle properly. 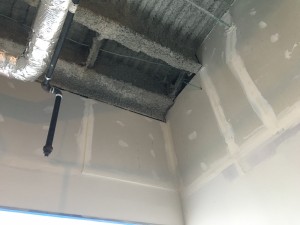 A suspended ceiling will hide this return air plenum. Notice the openings. Is this really air tight?

So when mold and moisture problems show up in these buildings, who gets the blame? At first, it may be the contractor. But if the contractor constructed the building just like the construction documents showed, he might be off the hook. If the design is called into question, who on the design team gets the blame? If the building enclosure leaks (they all do) is it the architect’s fault since they designed the enclosure? Or is it the mechanical engineer’s fault because the mechanical system is the driving force bringing the air into the building (the pressure differential induced by the fans).

The offense is bad, the defense is young. Special teams don’t play well. We have too many penalties. I get it. The lack of diversity in LSU’s offense and the number of penalties drive me up the wall. Les can (and now he better, especially after last fall!) change this. If not, we’re gonna be in for a long football season. In case you missed it, there’s not a huge margin for error in the SEC.

If there is moisture in that air, condensation and mold can result. The problem is, many times the mold and moisture problems don’t show up where the air comes in at first. Sometimes these problems are hard to spot. Mechanical engineers should know this, and most importantly, should do their best to make sure their systems don’t contribute to mold and moisture problems (much easier said than done, kind of like all of a sudden having LSU show up with an NFL caliber passing offense).

We are working on a project right now where the building probably will have similar problems down the road, because the return air plenum extends all the way to the perimeter. This doesn’t have to be a problem, just as long as the building is pressurized at the enclosure, and no unwanted air or moisture can make its way into the building. All too often, what we see is a leaky enclosure connected directly to a return air plenum, and that allows unwanted moisture in the building.

On this project, we pointed this out, and true to form, the architect says two things:  1) the building is positively pressurized, and 2) the mechanical engineer is responsible for the HVAC design. If I were to turn around and ask the same question of the mechanical engineer, he may very likely say the leaky enclosure is not his problem. The architect was also quick to point out how the enclosure was designed to be air and water tight. That sounds great, except for the fact that I saw first hand that wasn’t 100% true – we were at the site, saw a hole in an exterior wall, and I felt air coming in when I put my hand over the hole. And you’ll be happy to know the Owner has a full time enclosure consultant on this job. So at least there’s that. But one person can’t possibly catch every little thing.

So two different people on the design team might be working in a metaphorical vacuum (ha ha!), at least initially, and then later on, in a literal vacuum as the system sucks unwanted moisture into the building. What probably should happen is the architect and the mechanical engineer should sit down and figure out how the HVAC system and the building enclosure interact. Make no mistake about it, the HVAC system and the building closure interact on every building. So it’s a good idea to sit down and figure out what kind of problems can occur – early on in the design. Otherwise, problems can occur in the construction phase (leading to delays and possible cost overruns). But we definitely don’t want to see problems once the Owner occupies the building.

But since this is a mechanical system problem, the damages and the problems are laid at the feet of the mechanical engineer. These problems are avoidable if the mechanical engineer and the architect do a better job communicating. Otherwise, taking the standpoint that this is someone else’s problem to solve, or the problem does not exist at all, is going to result in trouble. At the very least, the architect and mechanical engineer should make sure there’s a discrete air barrier between the building enclosure/exterior environment interface. But I don’t think mechanical engineers are 100% to blame for these problems. And while Les Miles is the man in charge, we fans can’t expect him to win the SEC West each year. But Les, I’d sure like to beat Bama every once in a while! And by the way, you could probably have some seasons where we go .500 and you’d get a pass – just beat old Nick Saban.

To wrap it up, Les, if you’re reading this, I love you pal. But let’s get us a passing game to go with our fantastic running game. Run some trick plays. I know you like that. And once again, never ever ever ever run the option. Ever.

And for the rest of us, let’s appreciate a pretty good coach and football team, and also do a better job communicating and figuring out how our different pieces of the design interact with the designs of others. And of course, I’m all for giving engineers a break whenever we can. But I have to admit that I’m biased. I know many of you will disagree on my take on Les Miles and the mechanical engineer’s situation. That’s ok – I’ve had many people disagree with me in the past. If you’ve run into the building enclosure/return air plenum problem, how did you fix it? Please share it with me and I’ll post your solutions in the future.

Share your stories – email me and I’ll include your comments. I’ll remove names, dates, and details to keep your privacy safe.

And remember, if you need help: